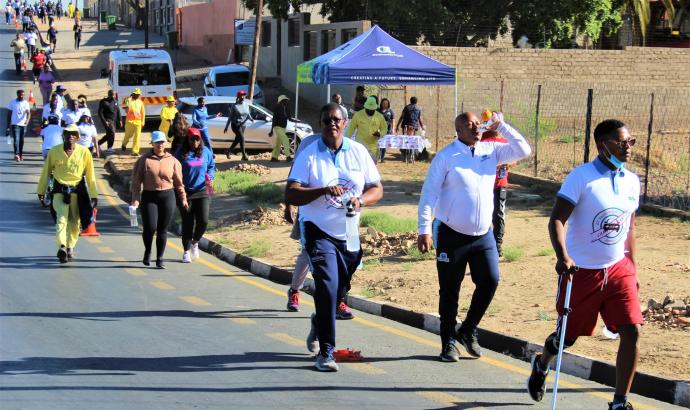 September 22  is International "Car-Free" Day, aimed at raising awareness of air pollution and its impact, not only on people's health but also on the environment.

To mark this day, some City of Windhoek employees, accompanied by representatives of local corporate companies, parked their vehicles in Khomasdal and walked, jogged or cycled for more than 5km to town.

Seasoned fitness fanatics and amateurs alike all exchanged their vehicles for physical activity.

It didn't matter if you ran, jogged or cycled, as long as you just weren't driving.

With an increase in the city's population and industrial activities, air quality is said to be under threat.

All the more reason for drivers to give their cars a rest.

"We are very dependent on cars, they make our life better but at the same time, they also make us lazy and they also have a lot of health problems that they contribute to and we should not forget the ancient way of just taking a walk or cycling," said Henog Tjikune, a participant at the event.

Health issues related to air pollutants are well documented and according to the United Nations, air pollution is the leading cause of many common diseases.

"Air pollution can take an extreme toll on health and contribute to respiratory diseases, cancer and other life-threatening conditions.

About 7% of lung cancer deaths, 18% of pulmonary disease deaths, 20% of stroke deaths, and 34% of heart disease deaths, are as a result of poor air" cautioned O'Brien Hekandjo, the City's acting CEO.

The City of Windhoek Mayor, Sade Gawa!nas encouraged all the motorists starting with the municipality employees to avoid using their cars for the rest of the day and carpool or use public transport instead.

"Windhoek is fast becoming heavily motorised which is a great concern. In addition to raising awareness of air pollution, today's event is an opportunity to promote non-motorised transportation as an alternative mode of transport using the newly constructed NMT lanes."

The City of Windhoek will be celebrating International "Car-Free" day every year.