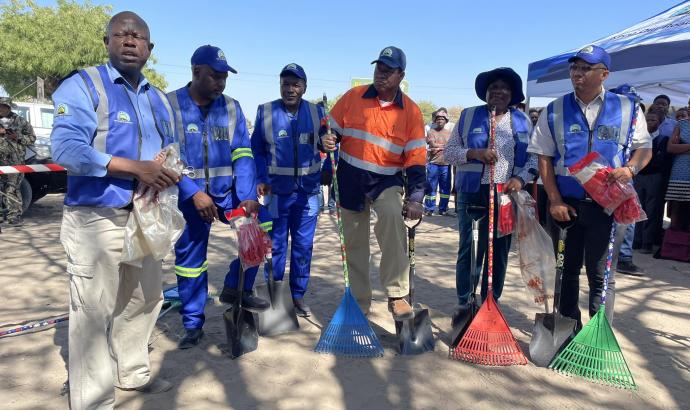 The Roads Authority launched the nationwide clean-up campaign of the national road reserves at Rundu in the Kavango East Region on Thursday.

The campaign aims to sensitise all road users and communities on the sustainable benefits of keeping road reserves clean and taking care of the environment.

Launching the campaign, the Minister of Works and Transport John Mutorwa indicated that despite Namibia being accorded the top position of having the best roads in Africa by the World Economic Forum for five consecutive years, such achievement is clouded by the litter and garbage on the road reserves.

Mutorwa said Namibia is one of the most preferred tourist destinations, hence the need for a litter-free, safe and sustainable road network.

He indicated that in order to conduct a successful clean-up campaign, full participation of municipalities, business communities, civil societies and all road users is required.

Mutorwa is also concerned about the illegal dumping of waste in open spaces along the road network in towns and cities and called on municipalities to come up with a sustainable waste management solution to address the illegal dumping.

The minister also appealed to the Roads Authority to embark on an extensive education campaign and awareness programmes to facilitate long-term changes in attitudes about littering.

Mutorwa also wants to see a reduction in road accidents saying road users need to self-regulate their behaviours adding that Namibia is losing its able generation who are contributing to the country's development.